During the early summer of 2017, God was persistent in His invitation for me to get away with Him. I was not exactly sure where it was He wanted me to go. I was certain it was away from the noise and chaos of my daily life. Away from my responsibilities and away from the distractions of the world. I knew He wanted to speak to my quieted heart so He could begin the process of setting me free. I let my amazing Mama know about these conversations I was having with God and this desire He had ignited. That is when she suggested we research the possibility of a wilderness expedition with SROM. I was thrilled she would consider being my companion on this journey. Not only is she my mother and my dear friend but she is also a wise spiritual advisor. It did not take any convincing at all. Nature is my sanctuary, it is where the veil between Yahweh and my soul seems the thinnest. We booked our trip and set out for 10 days in the deep backcountry of Wyoming/Colorado in late July.
The first three days of our adventure were spent rock climbing in Vedauwoo. We quickly fell in love and bonded deeply with the other people in our group. The days were physically, mentally, emotionally and spiritually satisfying. The evening before we were going to transition to Rocky Mountain National Park, our guides Jess and Keith asked Mom and I to sit down and have a heart to heart with them. My 63 year old mama is all kinds of amazing. She is spunky, sassy and FULL of energy. Jess and Keith had noticed all these things about her AND had a great appreciation for her spiritual maturity and insight that she graciously shares. They had also noticed her shortness of breath during some of our treks. The altitude coupled with her asthma was affecting her more than any of us wanted to admit. But, we needed to consider what the next 7 days would entail. We would be increasing in elevation daily once we made it to RMNP and once we were on the mountain, the only way off the mountain was self-evacuation in most places where we would be hiking. The four of us took some time to pray about what should happen. It was unanimously decided Mom should not continue on to Colorado but instead stay in Wyoming and wait for us to return. After the decision was made, I found a cleft in a rock, climbed inside and threw a fit. I cried and shouted at God. I then promptly stomped to our “kitchen” where everyone was lighting their cook stoves and prepping for dinner. I huffed and pouted as I chopped the onions and peppers for our meal. I then announced to Mama in what must have sounded much like the drama I brought to the table when I was a teen, that I refused to go up the mountain without her. I went on to say I was tired, I wanted a hamburger, a chocolate bar, coffee that did not taste like dirt and a pedicure. I concocted a most excellent plan for the two of us to spend a week in a hotel eating, sleeping and being pampered. As only my mother can, she calmly validated my feelings but went on to say “I believe that God wants you on that mountain. I believe He has something very precious He wants to share with you. I also believe He is kind and He will reveal it in another way at another time if you do not go up the mountain. I will support you in whatever decision you make.” I let the battle continue in my head until the thoughts of a soft bed, hot shower and tacos took over. I then stood up and walked over to our guide Jess and let her know I would be leaving with Mom in the morning. She put her journal and pen down, looked directly into my eyes, smirked and then laughed in my face. She then pulled a piece of paper from her journal and handed it to me saying, “I thought God had me sitting here writing this for your mom, but now I know clearly it is for you.” It was a poem that she had literally just finished as I walked up to speak with her. I looked down and read these words…
She will rise
She will fly
Though her struggles
are lofty and high
Leave her by my side
I will carry her day and night
Teaching her
My way, My truth, My light
Upon My mountain
She will stand
Upon my mountain
I will be found

I looked up at Jess and burst into laughter and tears at the very same moment. I then turned to my mama and handed her the poem. After she read it I shrugged and with a big grin said “I guess He really wants me on that mountain.”
The next morning we dropped mom off at a gas station with a SROM guide who met us there. I climbed into the back of the van with tears stinging my eyes. Jess tossed a chocolate bar at me and smiled. We drove a few hours to get to RMNP, during the ride I spent time talking with God and asked Him to please set me free from the lies I have been a slave to for so very long and to begin mending my shattered heart. When we arrived, we had to stop in town and get bear canisters to place all our food inside. After we repacked everything to fit into our packs, they weighed about 60-65 pounds, that meant I would be carrying more than half my bodyweight up a mountain. All was well for the first hour, we were increasing in elevation with every step, we were talking and laughing, everyone was lighthearted and filled with excitement. As we continued into the second hour, the pain came on and it was intense. After five pregnancies and four live births to four BIG boys, my pelvis is pretty marred. The throbbing ache I felt each time I took a step had me wincing. When we finally stopped for a water and blister check break, I told Jess how I was feeling. I let her know that giving birth unmedicated at home was FAR more pleasant than what I was currently experiencing. I then told her I was planning to turn around, walk back down the mountain and call Bunny (my mama) to come pick me up. I had it all worked out so I would not inconvenience anyone. She told me nope that was not happening. I argued “Fine, I will keep going today but tonight, I will sneak out of my tent and walk back down in the dark. I might be eaten by a bear but that will feel better than this.” She rolled her eyes and told me to take my pack off. She then took her pack off. This was the moment that this badass chic, (the only chic according to Bunny that has ever been able to meet my sass with greater sass) became Jesus in the flesh for me. She took out the heaviest items in my pack and traded them for the lightest items in her pack. She was literally willing to carry my burden. We trekked on for another hour or so, during that time the pain lingered but I could keep hiking. At the next break, we set up our camp chairs, took out our snacks, tossed our boots aside and stuck our feet in the cold stream. After our bellies were filled and our feet refreshed, we continued on. About half an hour later my friend Jamie realized she had left her chair by the stream. Jess offered to jog back and get it so we could continue making forward progress.

It was not long before the pain became unbearable once again. I had tears rolling quietly down my face. I knew there was absolutely no possibility I could continue on in this pain for 7 more days. I told myself that when we stopped for our next break, I was going to ask the group to pray for me. That is when the Spirit whispered “No, you are going to pray for yourself right now.” I quipped back “But, I don’t do that.” My apostasy was met with magnanimous laughter and the words, “Well, you do now.” The physical torment was so fierce that I relented but all I could muster was, “Heal me.” It started as a trusting chant inside my heart. Then it blossomed to a melodious whisper, “Heal me.” Then it exited my mouth like a crashing wave aware of its power and strength. “HEAL ME!” After a few repetitions of this bold roar, my hips began to tingle. I kept on with my desperate call to God and after a few more steps, the pain was completely absent from my body. I felt as if I could soar, as if I was a bird who took flight for the very first time. I was so overcome with love, thankfulness, joy and wonder. I began crying and saying “Thank you, thank you, thank you.” I repeated this over and over until I caught up with the rest of the group. They were sitting on the side of the trail and when they saw me with tears falling down my face, they jumped up to check on me. Keith questioned “Oh no, is it that bad?” I euphorically shouted, “No,It is that GOOD!” I then threw my pack off, tossed my trekking poles and laid face down in the dirt crying out over and over, “Thank you God, you are so kind to me.” When I finally got up out of the dirt, we all gathered around to pray. That is when Jess caught up and we excitedly told her what had just happened. We were all on a spiritual high at that point. Jamie invited me to sit on a fallen tree with her so she could pray over me. When we finished our prayer time together, she said “God just told me that was your physical healing and your emotional healing is coming.” I teared up again because that is exactly what He had just put on my heart as well. I was not certain if the pain would remain gone the rest of the time in the backcountry but I knew no matter what, God would carry me up the mountain. I suffered no more physical pain for the entirety of the hike. The pain never returned once I came back home either, none of the activities that would normally exacerbate it caused it to return. He healed me. And He has begun a gentle work on my interior castle. He is making all things new. His love is so intense. We are His beloved. May my heart always trust in His love as He restores my soul. 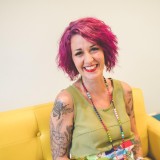